It’s been over a week since we’ve been here. Work and travel got in the way and we missed the place terribly.

In the meantime we had done some shopping.

Firstly a 3l steel water urn that sits on top of the wood burner. The caravan batteries aren’t powerful enough to power a normal kettle, so we had been heating water in pans on the gas cooker then sitting them in the stove to keep warm. It’s quite a small stove so there was only space for a couple of pans. The new urn has a curved back that should fit round the flue, a handle and a tap. Great theory but the photos must have used some kind of miniature wood burner with a pencil thin flue as it’s definitely smaller than it looked online. Still, it will do the trick and looks great.

Next, a white 2.5l enamel kettle, again to replace pans sitting on the stove.

Mac had found a small fridge that runs off the battery, a dinky little thing that is big enough for milk and a few small things. It would probably fit 6 bottles of beer.

I had found a solar powered animal repellant. Good timing as we noticed mouse droppings for the first time and the mole hills on the driveway were getting serious.

A bird feeder to attach to one of the floor length windows. We have three house-martin nests at the front, tucked in at the top of the windows. The traffic back and forth is constant and we have to be careful opening the windows not to disturb them too much. The nest above the front door has been a fragile affair. Three times it has fallen, leaving a slightly muddy pile on the front steps. Three times it has been rebuilt and finally it looks sturdy enough.

The farmer has moved sheep into the field right beside us on the other side of the burn. They have all been shorn so it’s getting harder to tell the adults from the lambs.

The three in the photo seemed to be asking me why on earth I was leaving for the bus at 0715. Good question. Sadly, work beckons but I’m already excited to be coming back later. 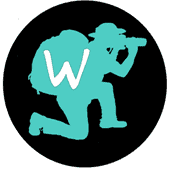